Huntly Castle was a baronial home for 500 years and still attracts visitors because of its impressive architectural style and history.

Situated on the River Bogie and Deveron, the castle lies just outside the pretty town of Huntly. Although now a ruin, the setting makes it romantically picturesque and its history is remarkable.

The Earls of Fife built the original stronghold, the Peel of Strathbogie, around 1190, to guard the crossing-point where the rivers Bogie and Deveron meet. But it was the mighty Gordons who made the stronghold their own from the 14th century and renamed it, Huntly Castle.

The surviving remains tell the story of the development of the castle in Scotland, from the motte and bailey of the 12th century, through the tower house of the later Middle Ages, to the stately stone palace of the Jacobean era. The South face of the castle is French in style and bears fine heraldic sculpture and inscribed stone friezes.

Inside the palace, you can see the two enormous heraldic fireplaces in the Marchioness’s lodgings. This castle is said to have the earliest stronghold on the site which sheltered Robert the Bruce in the 14th century.
The castle is open throughout the year but you’ll need to check the opening times as they vary a bit from Summer to Winter. 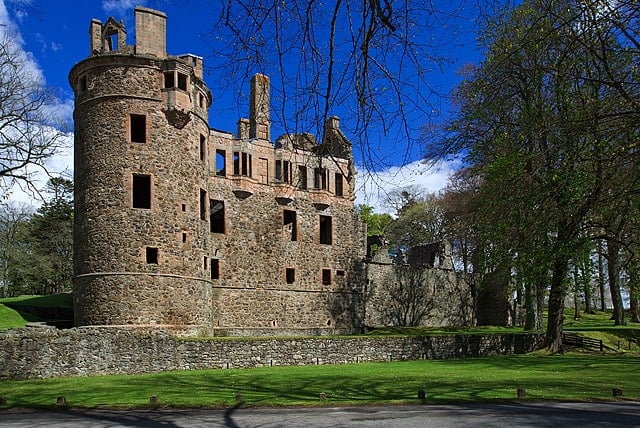 Huntly weather forecast from Yr, delivered by the Norwegian Meteorological Institute and NRK

9.72 km
The GlenDronach Distiller was founded in 1826,  located in the valley of Forgue in Aberdeenshire, takes its name from the Dronac burn which is the distillery’s water source. The GlenDronach Distillery has a Visitor Centre and gift shop, with guided tours running regularly throughout the day. Opening times vary during the year and during August the distillery is silent but this allows Read more…