Dunluce Castle is a now-ruined medieval castle. It is located on the edge of a basalt outcropping in County Antrim (between Portballintrae and Portrush), and is accessible via a bridge connecting it to the mainland. The castle is surrounded by extremely steep drops on either side, which may have been an important factor to the early Christians and Vikings who were drawn to this place where an early Irish fort once stood.

It is first documented in the hands of the MacQuillin family in 1513. The earliest features of the castle are two large drum towers about 9 metres (30 ft) in diameter on the eastern side, both relics of a stronghold built here by the MacQuillins after they became lords of the district, the chieftain of which was known as Lord of the Route, in the late 14th century.

Later it became the home of the chief of the Clan MacDonnell of Antrim and the Clan MacDonald of Dunnyveg from Scotland. Chief John Mor MacDonald was the second son of Good John of Islay, Lord of the Isles, 6th chief of Clan Donald in Scotland. John Mor MacDonald was born through John of Islay’s second marriage to Princess Margaret Stewart, daughter of King Robert II of Scotland. In 1584, on the death of James MacDonald the 6th chief of the Clan MacDonald of Antrim and Dunnyveg, the Antrim Glens were seized by Sorley Boy MacDonnell, one of his younger brothers. Sorley Boy took the castle, keeping it for himself and improving it in the Scottish style. Sorley Boy swore allegiance to James IV of Scotland and his son Ranald was made Randal MacDonnell, 1st Earl of Antrim by Queen Elizabeth.

Four years later, the Girona, a galleass from the Spanish Armada was wrecked in a storm on the rocks nearby. The cannon from the ship were installed in the gatehouses and the rest of the cargo sold, the funds being used to restore the castle. MacDonnell’s granddaughter Rose was born in the castle in 1613.

At one point, part of the kitchen next to the cliff face collapsed into the sea, after which the wife of the owner refused to live in the castle any longer. According to a legend, when the kitchen fell into the sea only a kitchen boy survived, as he was sitting in the corner of the kitchen which did not collapse.

Dunluce Castle served as the seat of the Earl of Antrim until the impoverishment of the MacDonnells in 1690, following the Battle of the Boyne. Since that time, the castle has deteriorated and parts were scavenged to serve as materials for nearby buildings.

3.18 km
Runkerry Strand beach, also known as Bushfoot Strand and Blackrock Strand, is 1.2 km long with a general north-east/south-west shoreline except at the north-east end where it swings north to Runkerry Head. The river Bush enters the bay at the south-west corner. The beach is backed by sand dunes. Runkerry is one of the best surfing beaches in the UK, Read more…

3.89 km
Bushmills Irish Whiskey is made at the world’s oldest licenced working distillery in County Antrim, Northern Ireland, on the beautiful North Coast. Experience the rich aromas and full-bodied flavours of Ireland’s oldest working distillery (1608) by pre-booking one of our tutored tasting events. Choose from several options ranging from a virtual tour to an hour-long run-through of our exclusive brands Read more… 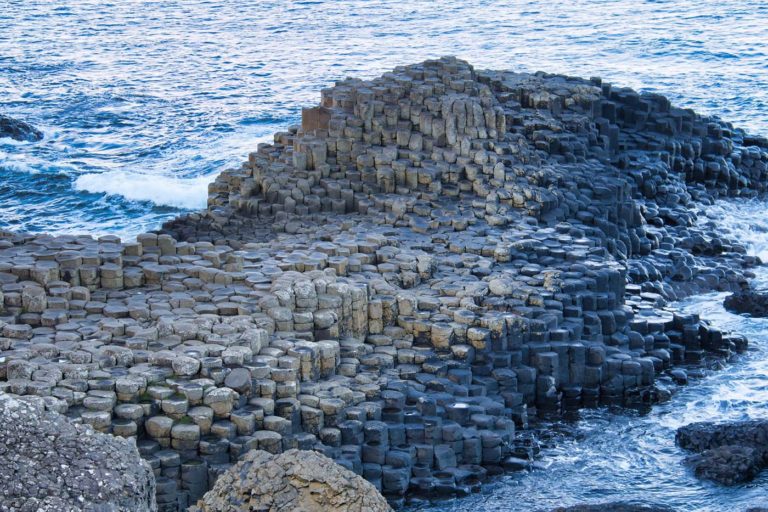 6.03 km
The Giant’s Causeway is a natural rock formation created by cooling lava millions of years ago.The causeway is located about 3 km (1.8 miles) north of the town of Bushmills along the North Atlantic coast of County Antrim, Northern Ireland. This is Northern Ireland’s only World Heritage site and a spectacular natural phenomenon with over 40,000 interlocking columns of basalt. Read more…