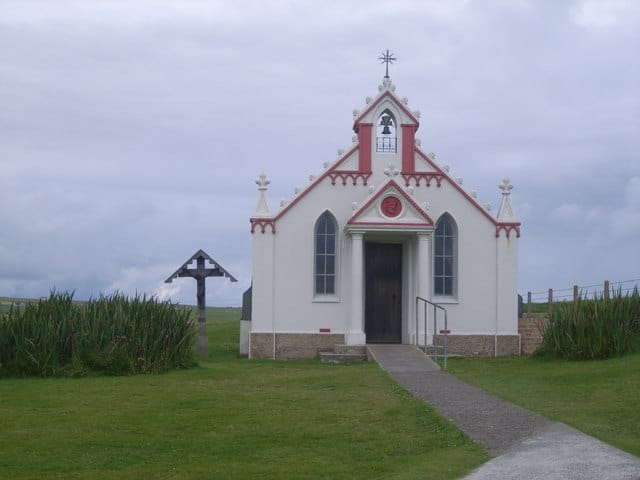 The Italian Chapel is a highly ornate Catholic chapel built by Italian prisoners of war captured in North Africa during World War II, who were housed on Lamb Holm while they constructed the Churchill Barriers to the east of Scapa Flow. Only the concrete foundations of the other buildings of the prisoner-of-war camp survive. It was not completed until after the end of the war and was restored in the 1960s and again in the 1990s.

The chapel was constructed from limited materials by the prisoners. Two Nissen huts were joined end-to-end. The corrugated interior was then covered with plasterboard and the altar and altar rail were constructed from concrete left over from work on the barriers. Most of the interior decoration was done by Domenico Chiocchetti, a POW from Moena. He painted the sanctuary end of the chapel and fellow-prisoners decorated the entire interior. They created a front facade out of concrete, concealing the shape of the hut and making the building look like a church.

Chiocchetti remained on the island to finish the chapel, even when his fellow prisoners were released shortly before the end of the war.

Our 7 day weather forecast for Lamb Holm in Orkney Islands

No listings were found matching your selection. Something missing? Why not add a listing?.