St Magnus Cathedral is situated in the town of Kirkwall, the main town of the Orkney Islands. This magnificent cathedral, a fine example of Romanesque architecture, dominates the skyline of the town.

Founded in 1137 by the Viking, Earl Rognvald, the cathedral was added to over the following 300 years and even has its own dungeon! It is known for being the most northerly cathedral in the British Isles and is a parish church of the Church of Scotland.

Open all year round to the public. 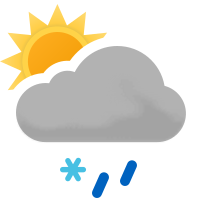 Favourite
26.46 km
Marwick Head is a Nature Reserve run by the RSPB located 4 miles north of Skara Brae on the western side of the Orkney mainland. Facing the Atlantic Ocean, the Marwick Head sandstone cliffs are home to thousands of nesting seabirds including kittiwakes, puffins, guillemots, razorbills and fulmars. In Marwick Bay, you can also see many wading birds and ducks, Read more…

Favourite
10.49 km
The Churchill Barriers are a series of four causeways in the Orkney Islands with a total length of 1.5 miles (2.3 km). They link the Orkney Mainland in the north to the island of South Ronaldsay via Burray and the two smaller islands of Lamb Holm and Glimps Holm. The barriers were built in the 1940s primarily as naval defences Read more…

Favourite
21.51 km
Warebeth beach is located on the western side of mainland Orkney with the beach being named after the large amount of seaweed or “ware” that can be found washed up, which during the 18th and 19th centuries harvesting this seaweed was big business for the locals. Warebeth beach is a large curving sandy beach with stone slabs and the beach Read more…

Favourite
37.91 km
The Lady Kirk is one of two ruined churches on Westray, built in 1674, on the foundations of a 13th-century church. The church is mostly complete with the exception of the roof. The nave is rectangular, with a largely complete gable at its west end, topped off by a bellcote. A line of holes in the gable suggest there was Read more…

Favourite
8.25 km
Waulkmill Bay is a remote beach within a tidal bay and Scottish Natural Heritage Site of Special Scientific Interest. The beach is located on the northern side of Scapa Flow. To the east of Waulkmill Bay is the RSPB Kirbister Preserve. Read more…

Favourite
17.31 km
The Broch of Gurness is an Iron Age broch village overlooking Eynhallow Sound. All that remains of the village is the 3.6 metres (11.8 ft) high central tower and the thick stone walls. The broch has the remains of a settlement surrounding and adjoining it. Read more…

Favourite
12.62 km
Dingieshowe Beach is a south facing sandy beach backed by sand dunes. The beach is located in the south eastern corner of mainland Orkney and is also known as Taracliff bay. You also have on the other side of the road Sandi Sand beach that looks out into the shallow bay of St Peter’s Pool. Read more…

Favourite
22.97 km
Bay of Skaill beach is a large remote sandy beach on the west coast of mainland Orkney. At one end of the beach, you have the Bay of Skaill that is close to the famous Neolithic settlement of Skara Brae. Read more…

Favourite
8.02 km
Mine Howe is a prehistoric subterranean man-made chamber dug 20 feet deep inside a large mound. It is not sure when it was built, some believe it to have been built roughly 2000 years ago during the Iron Age. Some researchers think that it could be as old as 5000 years, which would place it in the Neolithic period. There Read more…

Favourite
23.1 km
Skara Brae is a large Neolithic settlement, located on the Bay of Skaill. The settlement consists of ten clustered houses, dated from the late Neolithic and inhabited for around 600 years, between 3200BC and 2200BC. The settlement is one of Europe’s most complete Neolithic village and has been called the “Scottish Pompeii” because of its excellent preservation. Because of this Read more…

Favourite
27.6 km
The Brough of Birsay is a small 21-hectare uninhabited tidal island off the north-west coast of The Mainland of Orkney. The Island has Celtic and Norse remains and is well known for the breeding colony of Fulmar (Fulmarus glacialis) and Guillemot (Uria aalge) The island is accessible on foot at low tide via a 240 metre long causeway over the Read more…

Favourite
15.64 km
The Ring of Brodgar is a Neolithic henge and stone circle and is part of the UNESCO World Heritage Site known as the Heart of Neolithic Orkney. The site is generally thought to have been erected between 2500 BC and 2000 BC. Most henges do not contain stone circles; Brodgar is a striking exception. The ring of stones stands on Read more…