Sark is the smallest of the Channel Islands, and, despite being Crown Property, is ruled by a Seigneur (feudal lord of manor). It is a mere 3 miles long and 2 miles wide, the north and south parts being almost separate islands joined only by a narrow strip of land.

The white, octagonal tower of the lighthouse rises from the flat roofed service rooms and dwellings, the whole complex clinging to the steep face of the cliff which rises high above. The only means of access to the lighthouse is a flight of steps down from the top of the cliff. The buildings, which are made of stone and surrounded by a high retaining wall, are of the sort usually found at onshore stations however Sark is classed as a rock lighthouse. The main function of the station is to guide vessels, passing through the Channel Islands, away from the pinnacle of Blanchard Rock.

0.48 km
Eperquerie Landing beach is a small pebble beach. This was an old landing (hence the name) point for boats. Share: Read more…

1.89 km
The beach in Creux harbour is popular but you do need to be aware of the boats, although this is no longer the main harbour on Sark. The small beach is accessible through two tunnels cut through the cliffs. Share: Read more… 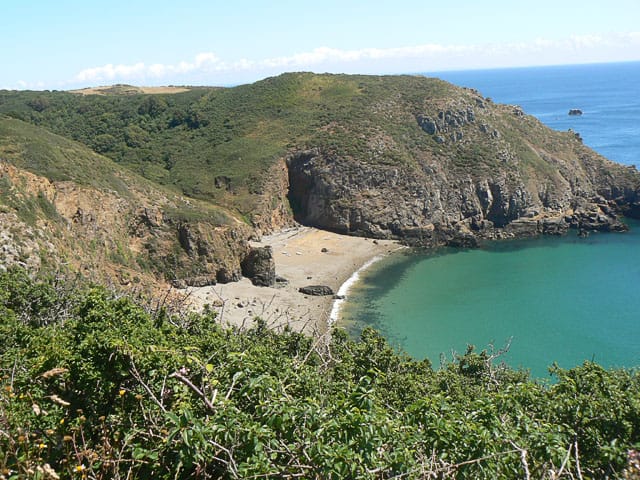 2.13 km
Dixcart Bay beach is a sand and pebble beach that all but disappears at high tide. TheHogs Back peninsular separates Dixcart Bay from Derrible Bay. Share: Read more…

Some more seaside locations in Isle of Sark