Hythe beach is a large pebble beach backed by a concrete promenade. You have three stretches of beach:

The beach has steps and some ramps from the promenade and although the pebble area at the top is wide you do have a steep slope down to the water and/or low tide part of the beach.

Midway along West Parade, you have the Hythe and Saltwood Sailing Club.

Parking is on the road or a small pay and display car park. Cafe and restaurant on the concrete promenade backing onto the beach. Toilets have disabled facilities (open from Easter to October).

Hythe beach does not allow dogs between St Leonards Road and Twiss Road, during May to October.

Why not check other beaches nearby as we have 2 beaches around Hythe, 46 beaches in Kent, or check our list of Kent Dog Friendly Beaches.

Hythe weather forecast from Yr, delivered by the Norwegian Meteorological Institute and NRK 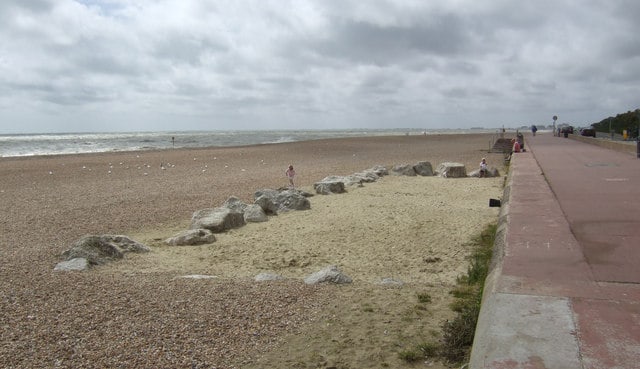 2.6 km
Battery Point beach is part of a long stretch of shingle beach. The beach marks the end Hythe and the start of Sandgate. Like this whole stretch the beach has a wide pebble top with a steep sloe down to the water or low tide areas. Motorized craft can be launched from the slipway. Parking on the road and a Read more…