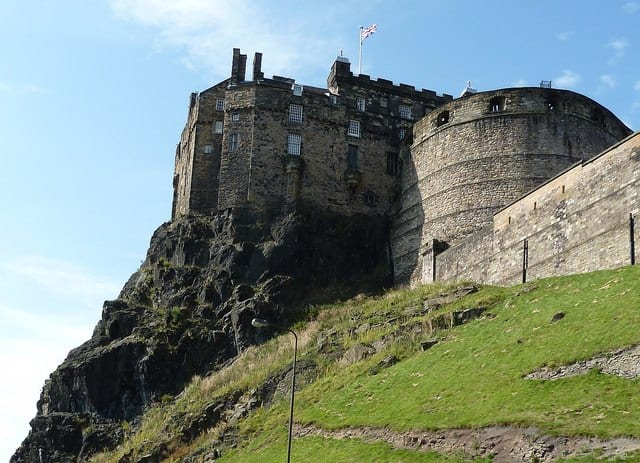 Edinburgh Castle dominates the skyline of the Scotlands capital city of Edinburgh, the castle is located at the top of the Royal Mile, at the west end of Edinburgh’s Old Town.

The volcanic Castle Rock offers a naturally defended position, with sheer cliffs to north and south, and a steep ascent from the west. The only easy approach is from the town to the east, and the castle’s defences are situated accordingly, with a series of gates protecting the route to the summit.

There has been a royal castle on the rock since the 12th century, and the site continued to be a royal residence until 1633. From the 15th century the castle’s residential role declined, and by the 17th century, it was used as military barracks with a large garrison.

Few of the present buildings pre-date the Lang Siege of the 16th century when the medieval defences were largely destroyed by artillery bombardment.

To help you make the most of your visit we provide complimentary guided tours and audio guides which are in a variety of languages are available to hire.

Our weather forecast for Edinburgh City in Edinburgh is split into two widgets. The first shows a timeline containing temperature, wind, sunrise/sunset and chance of rain, whilst the second shows the forecast for the week ahead including severe weather alerts when available.

Camera Obscura and World of Illusions

0.16 km
No Reviews
Favourite
The tower has six floors of interactive exhibitions. On the top floor, you have the Camera Obscura to project a “virtual” tour of the city, and also on the rooftop terrace with its views of Edinburgh and telescopes. The floors beneath hold the “World of Illusions”, which offers interactive exhibits demonstrating aspects of optical illusions, light, colour. There are also puzzles, a mirror maze, and a vortex tunnel. Although the project is primarily a tourist attraction, it also serves as a learning centre about optical illusions, holograms, the origins of photography and about Edinburgh itself.

0.34 km
No Reviews
Favourite
View all